(Editor's note:  The recap was delayed this week because Lane has been busy with his grad school midterms. I'm happy to know he's smart enough to realize that they are more important!)

We open on the three guys in the backyard set (though honestly I don’t know whose backyard this is supposed to be), and Agustin is showing his photos, looking for some input. Patrick and Dom are both a bit put off by the content (Frank having sex with the prostitute), and Agustin freaks out. There is some squabbling over Richie and the wedding, and Dom freaks out a bit about his restaurant endeavor. The entire scene is just a ball of anxiety being fed by all three of them.

Next up we have Patrick video-chatting with his parents, as he gets ready for his sister’s wedding. There is a pointed moment where his mom refers to Richie as “your friend.” As if Patrick wasn’t already consumed by stress and a spastic nature, he’s even worse when his parents are involved. I have a hard time imagining that Richie meeting his family is going to go well. 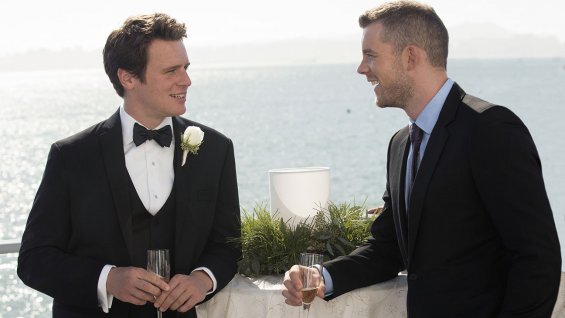 Dom takes Doris and a friend with him to the place where they’ll be doing the one night event to try to get people interested in his restaurant. Lynn (Scott Bakula) is trying to be helpful, but it turns out Dom is only slightly more functional than Patrick under stress, so it isn’t going very well.

Agustin decides to cancel his showing. I know he presented a lot of artistic motives for the actions and pictures, but I can’t help but feel that it was all just Agustin looking for a way to justify his sexual desires. Now he’s had the experience, and he isn’t enjoying the feelings it’s left him with.

As it turns out we won’t see how badly Richie meeting Patrick’s parents would have gone because Patrick’s incredibly heightened stress level leads to Richie deciding not to go to the wedding. This is starting to feel like it can only end with Richie getting hurt. While I’m sure Patrick will learn something from it I honestly like Richie more than I like Patrick right now, and so I want someone to knock some sense into him before it all goes wrong. Patrick makes up an excuse about Richie getting food poisoning, which his mom doesn’t buy for a second.

Then, SURPRISE! Kevin (Russell Tovey) is at the wedding. They explain why through some six degrees of separation moment, but the specifics aren’t really important, and I wasn’t really paying attention to them. Kevin ties Patrick’s bowtie so he can take a picture with his sister. Just another moment setting up whatever eventual bit of drama is going to come from these two.

Agustin tells Frank he decided to pull out from the show, which gets us the admission that Frank had to pull some strings to even get him into the show. With as bruised as Agustin’s ego is, this does not help things. Then we get down to the argument we all knew was coming, the issues that were cropping up over these two letting other people into their bedroom. In the end Frank storms away after realizing that Agustin has been paying a prostitute this whole time when he can’t even pay rent. Frank realizes what anyone with half a brain knew from the beginning of the show: Agustin isn’t good for him. Honestly, I’m happy for Frank and I don’t feel bad for Agustin at all. He’s been a self-righteous prick for most of the show, and he’s been taking advantage of Frank.

Dom has been edgy all episode, which could be explained pretty easily by the fact that he’s taking a huge step in his future. However, he’s been taking it out on Lynn, which I feel may have something to do with getting shot down romantically. Lynn finally confronts Dom about it, and in the end decides to allow Dom space to run the event. Dom isn’t thrilled about Lynn leaving, but I completely agree with it. Doris talks a little bit of sense into him to help him see that “some people really do just want to help.”

Back at the wedding Kevin and Patrick are people-watching and gossiping. After some fun banter between Kevin, John (Kevin’s beaux), Patrick’s sister, and Patrick, the latter sneaks off to call Richie and apologize. He gets Richie’s voicemail, and it’s pretty obvious that Patrick doesn’t know where they stand.

We move on to the reception and it actually looks like a pretty good party, though Patrick isn’t really into it. While he’s busy not enjoying the events around him Patrick notices his mother standing outside alone and goes to talk to her. Finally we hear out loud what his reservations about Richie have been this whole time. He’s Mexican, poor, and content being a barber and bass guitarist. The conversation takes a turn when he tries to blame his mother for Richie’s absence. While it’s true that their reaction may not have been the best his mother is completely accurate in noting that Richie’s absence is no one’s fault but Patrick’s.

Oh, yeah, and then Kevin drunkenly kisses Patrick in the bathroom.

The past couple of episodes have left me in a tough place for this show. Slowly but surely I am left caring more about the secondary characters than I do about the main three. I like Richie, Frank, and Lynn more than I like Patrick, Agustin (especially Agustin), and Dom. Dom’s story is the most sympathetic, but even he is rubbing me the wrong way. I was really enjoying the show, but if this trend of unlikeable main characters keeps up it’s going to be hard to stick with it.

Next up is the season finale. Let’s see what kind of fallout from this week we’ll get and what they leave unresolved to carry into season 2.