Those Were the Days

The church is full, the guests waiting expectantly for the wedding party. The music starts, played by the New Directions band, and the crowd turns around, looking down the aisle. There is Finn Hudson, handsome in a suit. He straightens his tie, dances down the aisle, and sings: "It's a beautiful night, we're looking for something dumb to do." He twirls, goes to a knee, and points down the aisle with both hands. "Hey baby, I think I wanna marry you." There is Rachel Berry. She dances toward Finn, singing her own verse. When she reaches him he picks her up, twirling twice as he carries her to the front.

Here come Quinn and Sam, singing and dancing up the aisle, the crowd smiling and clapping, reveling in appreciation of talent, youth and enthusiasm. Next are Kurt and Mercedes, followed by Artie, his wheelchair pushed by a buoyant Brittany, who seems to be bouncing on a cushion of air. Santana and Puck are right behind them, followed by Tina and Mike. (Wow, Harry Shum, Jr. knows how to move that body!) 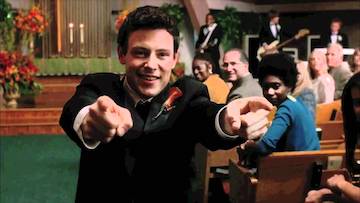 And then the groom appears: Kurt's father Burt, anointed by many Glee fans as the world's best dad. He does an endearing "Dad dance," and the crowd loves it. He gets to the front of the church, and turns around, arms outstretched to his approaching bride. Finn’s mother Carole sashays toward her soon-to-be husband as he goes to meet her. Arm in arm they move to the front of the church as the song continues, the crowd claps, and Kurt cries. As I watch I am crying too.

I happened upon the video yesterday on YouTube, and was transported back to a time that seems both like yesterday and like a moment from a prior life. What a time it was! Gay people were exploding in visibility and acceptance across the country, and Glee was a big part of that. By then it had become my favorite show, and each week I looked forward to Tuesday as “Glee day.” Gay entertainment site AfterElton was at its peak, still run by Michael Jensen and Brent Hartinger. I was a prominent part of the internet’s best commenter community, and on Wednesday I would waste a bit of my company’s time engaging in spirited back and forth commentary with other fans.

In the wider world Barack Obama was our president, the marriage equality movement was gathering steam, and the world seemed to be moving onward and upward toward an ever greater degree of equality and humanity. Problems and inequalities remained, of course, but we were moving in the right direction.

As I watched the video I was amazed by how intensely I felt the nostalgia, and by how much I had not consciously acknowledged the degree of change since then. Glee hasn’t been with us for a couple of years, of course. Cory Monteith has died, and Mark Salling has been charged with child pornography. It was hard to watch Cory and Mark singing and dancing with such apparent happiness in such an innocent time. Most of the rest of the cast have faded into relative obscurity.

AfterElton lost Michael and Brent, then changed its name to The Backlot, then was absorbed by NewNowNext, and finally disappeared completely. The terrific commenting community disappeared with it.

Most importantly, we exchanged Barack Obama for Donald Trump, and all of a sudden the world doesn’t look so bright and hopeful. The citizenry is far more polarized, and far too many people on both sides have become closed-minded and reactionary. Innocence and hopeful anticipation are hard to find. The world of endless possibilities has been replaced by a world that feels like a darkening day that presages a coming storm.

I’m depressing myself as I type this. But I’m actually here to tell you that things aren’t as bad as they seem, and we have the opportunity to return to the hopeful joy we felt during Glee’s heyday.

Everything in life is perspective, and we can choose how we look at the world and at our lives. I think we are making a big mistake when we let our antipathy to Trump dominate our perceptions of the world. The American system and government are time tested and resilient. We survived Richard Nixon, and we’ll survive Trump. Don’t fall for the idiotic talk about encroaching fascism. Step back for a moment and think about it with an open mind. Very little of your day to day life is different today than it would have been had Hillary won. The minute you recognize that the dark clouds begin to clear.

LGBT acceptance and support throughout society continues to increase, even among conservatives and Christians. Every day it gets easier to be openly gay. We have to be vigilant about fighting for the “queers left behind,” as Colin Walmsley termed them in an excellent piece last year on Huffington Post, but we should not lose sight of how much better life is becoming for the gay community. When the Glee episode I described aired marriage equality did not exist, and no American president or nominee had ever supported it. Today even Donald Trump calls it “settled law,” and has not opposed it. We don’t always see it, but social progress continues.

On a smaller level we have the responsibility to find things to be excited about, much as we used to be excited about Glee. There are always TV shows, books, movies, music, websites, sports, creative endeavors of many kinds. Stop focusing on a perceived social or political darkness, and embrace the good things.

Find something that in a few years will cause you to look back with joy and nostalgia. It’s up to you.