This week was all about the gay characters Ian and Mickey, and I loved it! Noel Fisher, who plays Mickey Milkovich, was amazing in this episode. So, let's start!

The show really played with fan feelings when they sent Ian to the Army and didn't confirm his return. However, all my worries were laid to rest when he showed up and reunited with Mickey. Yes, they both love each other, but it seems Ian didn't want to remain Mickey’s “secret.” The episode focused a lot on Ian trying to make Mickey come out of the closet in front of everyone. Even his father. Did Ian force him? Yes, he did. But I get why he did such a thing. A character like Mickey would never come out unless pushed out. And besides, Ian didn't hold his hand and drag him out. He told Mickey he'd break up with him if he didn't. I don't think of that as force. In a sense it's even healthy, as far as I'm concerned. No one should remain in a relationship with a closeted person. It'll most probably end up in heartbreak. 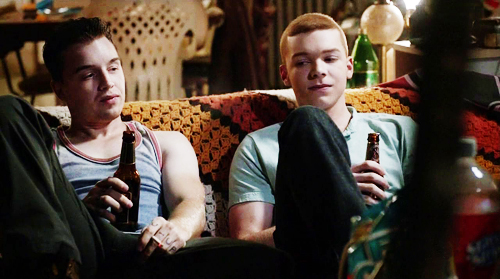 Mickey came out in front of his family and friends at his son's baptism party. His father, fresh out of jail, exploded and started to beat Mickey up. Ian stepped in to help, but in the end the police had to be called. Mickey also stood up against his wife, and I was glad he did. I am happy Mickey is out and proud, but I'm dreading how the show will handle Ian's condition. This week's episode was entertaining, but I have a feeling the show was taking it easy before a gut wrenching season finale next week.

Frank kind of lost his memory after his operation, and thought of a little (about to die) girl in the hospital bed beside him as Fiona. I appreciated the show trying to make us feel for Frank, but it's just too late now! He did show emotion when the girl died (she was still Fiona for him), but unless that brings a change in his character it was a waste of time.

Fiona was taken to prison. I hope she comes out soon.

Lip got $10,000 from Amanda's parents because they don't want him to date her. However, it's all a game that Lip and Amanda play because she's been doing that with all her boyfriends who she knows her parents won't approve of.

Debbie made nice with the twenty-something boy she's been crushing on, and he agrees to take her to the dance.

Like I said, this week was all about Ian and Mickey. Yes, they have a weird relationship, but that's part of the charm. Let's see what the finale has to offer next week!

Reply Hue-Man
7:20 PM on April 2, 2014
Despite being covered in blood after the Dad battle, Mickey (Noel Fisher) and his contented smile were hugely attractive. This is ironic after all the complaints I've read about "grungy" Mickey, etc. - it made me realize that he seemed always to have a scowl on his face before he came out.
The funny, subversive line was when one of the cops breaking up the rumble removed the cuffs from Mickey and said something like "Too much paperwork and my husband is waiting for me at home."
Debbie's humiliation was a reminder that she was a young girl in a battle with a grown woman - she was destined to lose.
Frank's post-surgery experience is much closer to what I've gone through. Anesthetics and painkillers definitely change your area code for days, not the 4 minutes that is usually portrayed on TV shows. I've had long conversations with visiting friends and afterwards couldn't recall that they'd even been in my hospital room!