And here we are, the end of season one. I need some redemption for these guys. Well, honestly, I don’t care if they redeem Agustin. I’ve resigned myself to being eternally annoyed by that particular egotistical man-child, but the other two have a lot of likeable qualities, and if I’m going to hold onto this show then I need to see those from time to time. Let’s see what this episode gives us.

At the top of the show Patrick goes by Richie’s workplace to try and talk to him, and he gets a pretty clear message to back off for a bit. He handled it better than I expected, though I’m not even close to surprised that Patrick is the “call 20 times and then stop by your work” kind of guy. Afterward he heads into work, where he’s late, because, yes, Patrick is the kind of guy to call 20 times, stop by where you work, and be skipping out on his own job to do so. They’re in a meeting being led by Kevin, who gets immediately awkward upon Patrick’s arrival. Just a little later Kevin tries to apologize, but Patrick isn’t in the mood to talk so he shuts down Kevin in much the same way that he was just shut down. 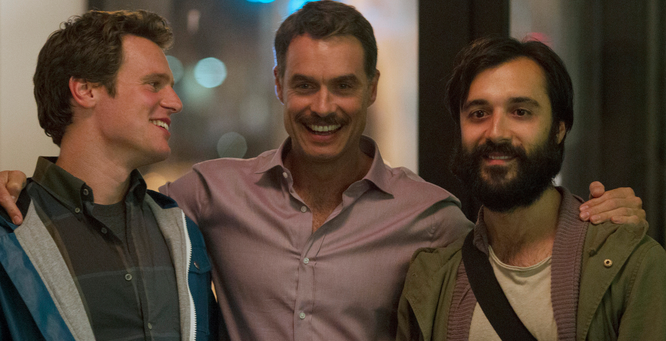 Agustin is freaking out about losing Frank, and I don’t know if I believe it’s because he cares about Frank, or if he’s just afraid to be alone. But I feel he deserves it. Agustin has no one to blame for losing Frank but himself. Frank is rather harsh with Agustin, and while I don’t think I could ever treat someone the way Frank does in this moment, I don’t disagree with his sentiments. Agustin has no idea who he is, and he’s so afraid to find out that he never follows through with anything. He decides to wander around the city, and is on some kind of drug (though I have no idea what).

Dom has a moment of clarity about things while setting up for his event, and he calls Lynn.

Patrick meets up with the still high Agustin to go support Dom at his restaurant pop-up. While there they get into a conversation about their respective relationships and where they are. Patrick ends up telling Agustin about Kevin kissing him, and the entire time they’re having the conversation I just kept waiting for Richie to show up and overhear. Relationships get more complicated when Lynn shows up with a date that is noticeably younger. This obviously upsets Dom.

Patrick gets called into work by Kevin. And by “called into work” I mean cornered so that Kevin can confess all the not so repressed feelings he has for Patrick. And then it happens that they have sex right there in the office. Rather significantly, Patrick bottoms for Kevin. The show made a pretty big point of letting us know the issues he has with bottoming, and even had him tell Richie that he wanted to bottom for him as a show of trust and connection in allowing Richie to guide him through the process. So, it’s incredibly telling that he bottoms for Kevin during a secret hook-up before he does so with the boyfriend he’s trying to hold onto.

At the end of the night as Lynn is leaving Dom pulls him aside to talk to him, and he has the most personal clarity of any of the main three characters. He apologizes to Lynn for his behavior in an incomplete but sincere way, and then (after being assured that the guy with Lynn is only a friend) kisses him. But this time the kiss is returned.

When Patrick gets home he finds Richie waiting there. Richie begins a very honest and self-aware apology for his actions. He’s also smart enough to know that Patrick isn’t in a place to commit to something right now, or as he says, “Pato, I am this close to falling in love with you, but I’m not going to do that to myself if you aren’t ready. And I don’t think you’re ready.” Patrick’s only response is tears.

Then the season closes on Patrick lying in bed with Agustin’s head in his lap watching “The Golden Girls.”

Dom I’m good with at the moment. Patrick, I don’t know. I give him credit for finally realizing he wasn’t being fair to Richie, and for not trying to bury himself in their relationship again, or convince them both of something that isn’t true. It’s a step, even if it took a major mistake to get there, even a major mistake we all saw coming. Agustin, well, I think I’ve made it clear how I feel about him.

I’ll be back for the show’s second season.

Reply Hue-Man
8:35 PM on March 15, 2014
I rewatched the first episode, Looking for Now, to see why my initial reaction was less than enthusiastic. Even knowing the characters, it's jarring to watch how many snippets were tossed into 22 minutes; Patrick cruising in the park, bus ride and drinks with the other two leads, noisy roomates in the morning, OKCupid at the office, date with the oncologist, meet Richie on another bus ride, drinks with Dom, his ex's bachelor party, and another meet with Richie. Plus two additional Dom and Agustin stories. Whew.
Despite the show's rough start, I'm looking forward to some solid story-telling in season 2.

Reply Ulysses Dietz
7:40 AM on March 14, 2014
Because Agustin is Cuban, he might well be a rich kid from Miami, so that's plausible. Cubans are self-perceived as the top of the Latino pyramid. I think Aggie's beard is a little too wild, and yes, I loved Richie's clean look...but now I realize that Aggie's beard might be yet another affectation to disguise who he is under who he wishes he was. Hmm...

Reply Ulysses Dietz
7:35 AM on March 14, 2014
Nice re-cap...you get it, where some viewers just can't (or won't)...the only real redemption that appeared in this finale was Dom (and I promise you, dealing with age is his issue, and that's something I understand, although 40 hardly counts in my book!). Agustin is the least redeemed--but you described him perfectly. Just totally lost and afraid and self-destructing (but being honest at least, which is step one, right?). Patrick is the most confused and the most confusing...his mom was right: he has class and race issues that are culturally inculcated. Kevin is the "perfect" boyfriend, except that he's both cheating on his boyfriend and using his position as P's boss (perhaps unintentionally). Attraction and love are not the same thing, and poor Patty is bewildered. At Patrick's age, I would have done the same thing. Really, Russell Tovey? Those ears? That voice? This show is like a flashback to the early 80s for me and my husband...

Reply Hue-Man
5:51 PM on March 13, 2014
In the Frank-dumps-Agustin scene, there's something I don't know whether we are to take literally or whether it's meant to be ironic.
Frank (to Agustin): "That whole concept you concocted with that little hustler? It's nothing but the musings of a bored rich kid."
Maybe this is too soon after my comments on Shameless but is Agustin secretly a Steve/Jimmy rich privileged gay trying something different? Even though he's done little to endear himself to viewers, I'm not ready to write him off just yet. As for the beard-haters, look at how OUR view of Richie changed when he showed up clean-shaven (yes, we are part of the problem!). I hope Looking's creative people shake up viewers in Season 2 - the cookie-cutter view of gay men - well-educated, well-off, (mainly) white, office workers, etc. - will be contradicted by telling the stories of more non-stereotypical gay men. (I know how unrealistic it is to expect non-mainstream stories from people whose life stories are the definition of mainstream!)