Apparently the night of dancing from the previous episode ended well for Patrick, because at the start of the episode he wakes up next to Richie, This is apparently not a new thing, however; they’ve been shacking up for a little bit now. I like these two together and I’m enjoying their storyline so far, but I’m unclear on something. When Richie first met Patrick he thought he was a doctor named, well, something other than Patrick. The show hasn’t addressed that since the first episode. Has Patrick straightened that out or is he still pretending to be a doctor? This is slightly confusing.

It seems as though the bulk of this episode is going to be Richie and Patrick playing around the city after Patrick decides to blow off work for the day. The show gives us the most explicit sex scene so far, which leads us into a conversation about serodiscordant relationships [where one partner is HIV positive and the other is not]. It isn’t long or detailed, but just the way the two characters react is a pretty decent encapsulation of the culture. Patrick is predictably freaked out by the concept, and Richie (whose ex was positive) admits to a certain amount of concern, though that concern didn’t outweigh his love for his ex. 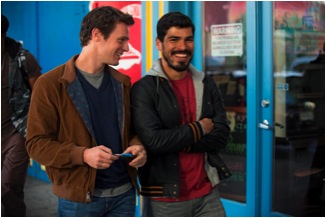 Something I’m noticing about Patrick in this episode: he exclusively uses the word “penis” for the male member. I know other characters have used other words in this series, and I’ll bet Patrick gets called on it at some point and has some perfectly neurotic reason for why it’s the only word he uses. I’m not sure if it’s awkwardly charming or awkwardly annoying, but it’s Patrick, so it’s (say it with me kids): awkward.

Richie takes Patrick to a planetarium where he sings for the second time in this episode (though he’s decidedly more clothed this time). They start comparing their relationship to Ross and Rachel from “Friends.” Then they swiftly change the conversation to the topic of tops and bottoms and Patrick’s issues with being a bottom. The gay community for a long time absorbed the heteronormative concept that being the receptive partner was the lesser role, and Patrick is the representation of that here. Maybe this whole episode will be equal parts developing their relationship and lightly addressing gay stereotypes/paradigms.

We get their coming out stories. Richie was caught blowing a Mormon missionary in his bedroom. His mom took it ok; his dad still hasn’t dealt with it. Patrick told his mom in the car on the way to the airport after Thanksgiving. Since then it’s been an unspoken known in their lives. I can relate completely with Patrick on that one as that’s pretty much how it’s gone in my family.

We’re clearly learning that a lot of Patrick’s issues come from his uneasy relationship with his parents. He may not live near them or involve them in his life that much, but he is desperately seeking their approval, and that permeates every part of his life. Richie isn’t blind to that fact.

We also see once again that when something is strange to Patrick he doesn’t know how to process it or let it go. Richie talks about his Señora. She’s a fortuneteller of sorts, and Patrick reacts with his typical insensitive questions and jokes. Richie handles it really well, but is clearly getting annoyed by the direction the conversation is taking. In the end Patrick makes it up to the audience by being willing to go to the Señora himself, even if he chickens out at the end. In general Patrick is willing to put himself out there for an experience, but he’ll let you know when he’s reached his limit as well. It may be the only self-aware thing he does.

OK, so the whole episode was just Patrick and Richie. This episode was a character study, and an enjoyable one at that. I don’t have nearly as much to say about it as I have episodes in the past, but the pacing was good for an episode that centered on just two characters and that didn’t have a B storyline. The interactions were honest, even if Patrick is always a bit of a heightened personality as compared to the rest of the cast.

However, seeing as how Richie never once called Patrick by name or addressed what his occupation is I still don’t know if Richie actually knows who Patrick is. Hmmm….