I found my elementary school photo album a year or so ago when cleaning out my dad’s house, and I wound up taking a very enjoyable stroll down memory lane. Though about half of the names from my kindergarten class had receded into the mists of time, I was surprised and pleased to see how many kids I still recalled from the Richard Nixon era. There was Brian, and Bryan (they were separate people), Mike, Jeannie, Tracy, Renee, David…

Peter and I weren’t close friends, even though at age six it sometimes seems as if everyone is either your best friend or your worst enemy depending on the classroom and playground dynamics that day. (See Harriet the Spy for the ultimate sketch of grade school-as-Stalag 69.) But I have no memory of actually interacting with Peter—no group work, no recess play, no birthday parties. The most distinctive thing about him was that he wasn’t ready when the photographer’s shutter snapped, and he looked like he was falling asleep. The photographer thus snapped a second picture and then mistakenly printed both, so those unfamiliar with the circumstances might have thought it was a “before” and “after” experiment, or that our class had a set of twins.

I did not have the words at age six to describe my feelings for Peter—how much I adored his spiky black hair, his dark-but-sparkling eyes, his ice-cap-melting grin. I knew what love was; I loved my parents and family (even my sister, most of the time). I loved my best friend Ron, who was in another class. But I didn’t have words for Peter, nor could I describe why I would look at his picture over and over again. All I knew was that somehow, for some reason, he brought me inexplicable happiness. 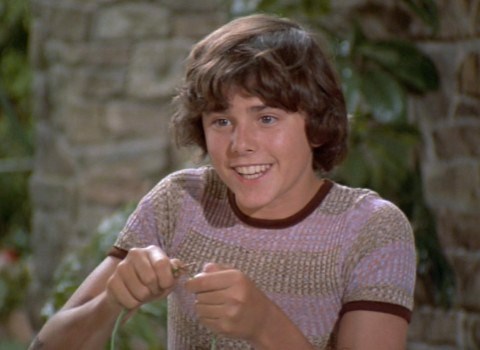 There were others, of course, courtesy of film and/or television, but when you’re young such characters are just as real as reality. Walt Disney’s Peter Pan gave me a lifelong obsession with red-haired boys, especially if they had sharp, foxy faces. (The Outsiders author S.E. Hinton once revealed in an interview that she had the exact same reaction and obsession due to seeing that movie as a child; I felt a surge of kinship with her.) The adorable Brandon Cruz from The Courtship of Eddie’s Father and Christopher Knight from The Brady Bunch were two other boys I loved to watch on TV, and avidly wished that they were my friends. (Chris Knight, of course, played Peter Brady; the name “Peter” seemed to haunt me.) And Ike Eisenmann, from the Witch Mountain movies, sent 11-year-old me into paroxysms of strange tingles during the 1978 sequel when he had an extended shirtless scene.

And when I got older? Sure enough, the dark-haired guys such as Henry Winkler (the ever-cool Arthur Fonzarelli), and Christopher Reeve (Superman) were usually the first guys to catch my eye, though watching Winkler play opposite redheaded Ron Howard on Happy Days was like getting a box of Cracker Jack packed full of prizes. Some three decades on, out of the roughly thirty guys I’ve dated (or “dated”), only around three have been blonde; all the rest had brown or black hair, with—of course—a couple redheads thrown in. The template was set early.

The moral of the story seems to be: it doesn’t hurt to take a look back now and then at the vagaries of one’s life, and search for intriguing patterns which may reveal larger truths. Sometimes, it’s just amusing and fun; other times, however, you may find long-dormant threads of attraction that you now know were part of a much larger tapestry. (Did it mean something that my first playground buddy when I was two or three, a stocky, dark-haired, sweet-faced boy named David or “Boo Boo,” was almost a template for the guys I would fall for when I grew up, only with more facial and body hair?) Crushes can also teach us some hard truths about love (sometimes it’s unrequited), and hopefully teach us compassion and gentleness, so that when we hold others’ hearts in our hands, we’ll treat them with delicacy and kindness.

One of the best gifts my mother-in-law ever gave me was a jumbled box of their old family photos, so that I could see my partner at every age prior to our meeting when he was thirty. There he was at age eight or so, sitting in a tree, wearing a baseball jersey, dark hair, freckles, and a sweet, slightly chunky face with the most adorable smile ever. I asked him what he was thinking when that picture was taken, and he said, “I was just waiting for you to come and find me someday.”

I would have had such a crush on him.

Reply Dennis Stone
5:04 PM on February 21, 2014
I too remember seeing guys, either in real life or on TV, who made me feel a "certain way." I didn't understand it at all, but there was just something about how some guys looked that made me want to be around them. At that time black hair was one of the things that did it for me. And quintessentially "cure" faces.