Queerbaiting: When a television show (or possibly a movie) inserts gay subtext between characters in order to generate interest and viewership among gay or liberal viewers, even though there is no intention that a genuine gay relationship ever develops. It’s often seen as a manipulative ploy.

Question:   Some viewers have accused Teen Wolf of engaging in queerbaiting, especially with the Stiles and Derek relationship. Do you think they are indeed doing that? 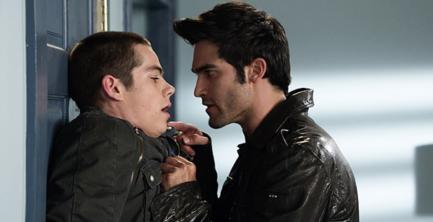 There are now popular, mainstream shows with major canon gay couples appearing on a weekly basis. Since 2010, Pretty Little Liars has featured Emily Fields, saving her girlfriend from the two dozen serial killers that wander her peaceful suburban town. Starz' Spartacus featured two gay power couples over four seasons, one of whom were literally the only pair to survive the series. Callie and Arizona have been Grey's Anatomy's second most major couple for five seasons and counting, forever in love and lust but kept from true happiness by a ludicrously long string of car accidents, plane crashes, hospital shootings, and amputations.

NONE of these characters have the amount of internet following that Stiles/Derek and Sherlock/Watson do. Many particularly vocal fandoms respond exclusively to canonically straight characters and declare anyone who doesn't want those characters gay a homophobe. While it is unfair that Stiles/Derek still won't become canon in this day and age, those actually interested in watching canon gay couples still have a plethora of other options to support instead.

Dean:    I think Teen Wolf walks a fine line with this, especially if you ever saw the clip of Tyler H. and Dylan on a water vessel snuggling up together: “We’re on a ship!” However, the proof is in the pudding. Danny has actually been shown to have a love/sex life with at least 2-3 different partners, including one of the twins, so that’s very cool. However, the show has also teased the Derek-Stiles subtext on numerous occasions, and the bit at the Halloween party last week where Stiles didn’t answer the girl who asked if he was (or could be) into guys seemed like it might be setting something up for the future. But if eventually none of these story lines and hints ever go anywhere, I think the show could be accused of toying with the audience.

Having said that, I do like the relationship between Scott and Stiles—they’re one of the most genuinely loving male friendships I’ve probably seen on TV since Jason and Tim on Friday Night Lights. Let’s face it, American TV in general does a pretty crummy job of showing deep male relationships in general, straight or gay or mixed. (I remember Parker Lewis being an unusual and notable exception). So even if Stiles and Derek doesn’t turn into a homoerotic relationship, at least Scott and Stiles’ friendship is strong, solid, and loving.

Farid:   This is kind of a tough one. I don't think TW can be called out on queerbaiting until the end of the show (which is a problem in itself). Because it's not as if the writers and producers don't know about the ships or the relationships the fans want to see. I can't ignore the “ship” video they released featuring Dylan O'Brien and Tyler Hoechlin to get votes, or the outtakes they released (of the same video) for some other voting thing. The cast has also teased Sterek more than once during interviews, etc. Stiles' bisexuality was also hinted in 3B. However, some viewers I know of didn't take it as a hint and thought Stiles didn't answer the girl's question because he was busy thinking about the key in his hand. It wouldn't hurt Teen Wolf to be a bit more obvious with stuff.

I agree with Dback. If these hints and subtexts (episode 3x18 was full of Sterek moments) aren't addressed, Teen Wolf would go down as the worst queerbaiting show in history. I'm not saying that other shows don't do it. It's just that the way that the cast has handled the situation, and the hints pertaining to Stiles, have built up a lot of expectations from the viewers. In Stiles' relationship with Scott, I see an amazing example of M/M bonding, and it's wonderfully handled, and neither is hesitant to show affection. Stiles relationship with Derek is the thing that can give rise to a negative reaction from the audience because the show has used the ship too many times for winning competitions/for promotion, etc., and that's definitely queer baiting whether you ship those two or not.

Lane:   Does the show queerbait? By a certain definition, yes. The question is, do I care? When examining the Sterek phenomenon I would honestly be more upset with the writers if they made the couple canon. Making Derek into a queer character would be contrary to all characterization laid out so far. There is no short or single storyline they could give me that would make me believe that Derek would actually be attracted to Stiles, and any attempt to do so would be contrived. The actors simply have good chemistry and a great comedic relationship. Is it fun to fantasize about, sure! But there are very few ways that it could become canon and be believable. One way the Sterek ho yay could pay off is in the revelation of Stiles’ bisexuality. That is a storyline that could work quite well. There is a lot of story to be mined with Stiles still pining after Lydia while dating a dude.

Anyways, back to whether I care about the queerbating. I don't. Teen Wolf has active queer characters with active romantic and sexual lives. No they aren't the lead characters, but we were never told they would be. Beyond that, simply recognizing a thing that exists in pop-culture (Sterek) and allowing your story lines to encourage it in some way isn't inherently a bad thing. Are we all freaking out about Supernatural? It's a fun dialogue with the audience. It's social media informing the production of a work in progress. I think that's kind of awesome. I see no need to attack a show that is actively engaging queer story lines just because it decides to toy with an idea fans created, and I do believe Sterek was a fandom creation not an original intention of the writers.

Dennis:   I think Lane pretty much nailed it. The number one consideration is that Derek is resolutely straight, with absolutely no sign of any gay interest. He’s also never shown anything but dismissal toward the much younger Stiles. As Lane says, the potential relationship was entirely a creation of the fans – and a small sliver of fans at that. (Fandom is much smaller than it appears to those of us who follow these things online.) Paul says that a boy/girl relationship likely would become canon if there was any sort of demand from fans. But that overlooks the primary consideration: Derek is straight!

I was arguing with a few folks on the Backlot a couple of weeks ago about whether things said by show creators or actors outside of the show itself should “count” when analyzing where the show actually goes. I totally don’t think any of that should matter. If it’s not in the show it doesn’t count. And so I don’t see ANY queerbaiting here, since in the show itself the relationship has not been teased at all. People are seeing what they want to see. Here are the two characters as presented in the show: 1. the older, straight, super-masculine werewolf Derek, who hasn’t shown the slightest interest in Stiles, but has shown passion toward women; 2. the younger, possibly bisexual, "skinny and defenseless" (as Derek described him in the last episode), non-werewolf Stiles, whose only portrayed sexual attraction has been toward Lydia. Are we really going to be all upset with the show, and even call it homophobic (as some Backlot commenters and others have done), because the actors or producers – outside of the show itself – play around a little with the online gossip and speculation? That just doesn’t make sense to me.

Reply Hue-Man
1:11 AM on February 18, 2014
Whether it's Superman or Teen Wolf, aren't all these characters deeply in the closet, passing as "normal" (=straight)? When Stiles fretted because Danny didn't find him attractive, didn't that open both same-sex attraction and permissible male-male relations? It may be considered queer-baiting but Sterek may have loosened the constraints the writers/producers felt about straight male TV relationships. Other than over-invested fans, I fail to see a victim here if the actors' hearts are in the right place and they're having fun. I don't expect anything to happen on-screen that is even close to the off-screen fantasizing...