The Remarkable Man Who Officiated At the Baker/McConnell Wedding

“I now pronounce you husband and husband.”

With those words Pastor Roger Lynn married Jack Baker and Michael McConnell on September 3, 1971, perhaps the first legal gay marriage in the United States. The two men kissed, and Lynn had a reaction that surprised him. It was jarring, what he called a “visceral reaction”. He had never seen two men kiss before, and he wasn’t ready for it. "It was frightening," he recalled many years later. "It forced me to come to terms with my own homophobia." 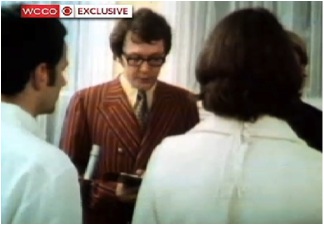 His reaction was and is surprising - to him then and to us now - because he was a supporter of the concept of gay marriage, and he had worked with Baker and McConnell at a Minneapolis drop-in center where counseling was provided to gay people. His pro-gay feelings were partly generated by the suicide of a childhood friend who had been persecuted for being gay, and also by his best friend at the seminary coming out to him. The Methodist church had a history of taking strong stands on social issues, and Lynn’s progressive nature was one of the things that led him to the church. And yet he was troubled when the two men kissed after the wedding at which he officiated.

There’s a lesson there for gay people today. But it will have to wait until later in this article. First, the rest of the Roger Lynn story needs to be told.

Lynn had not been the first choice to perform the marriage. Another Methodist minister had been chosen weeks in advance, and had done the traditional pre-marriage counseling. But 24 hours before the wedding he dropped out, apparently afraid of the reaction. When asked to step in, Lynn had no hesitation. He knew it would be a big story, but he also felt it was the right thing to do. The Methodist church at that time had no rules against marrying two men (that rule would come a year later), and so he had no reservations. He was even more sure of what he had done following the ceremony, when many guests approached him in tears to thank him for being a part of the historic moment. 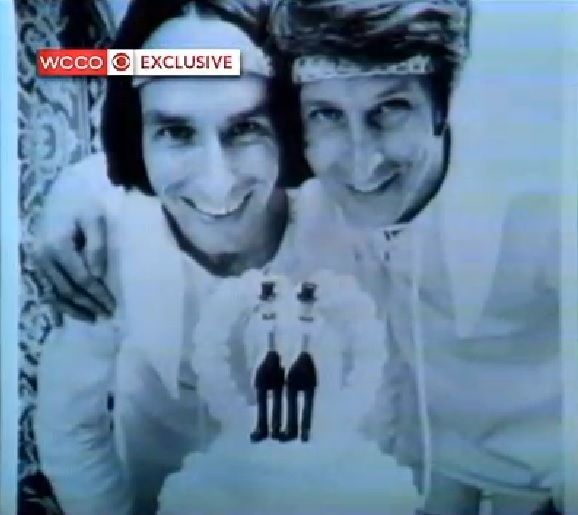 The wedding was big news around the nation, and especially in Minnesota. It changed Roger Lynn’s life forever. His actions were investigated by the Methodist church. Many online sites have stated that he was fired and then later reinstated. However, from Lynn’s own words in a recent interview it appears that he was not fired. The bishop found that he had done nothing against church rules.

His marriage did not fare as well. His wife did not oppose gay marriage in principle, but she did not approve of Roger’s activist role and the reaction it generated, or the overall movement of his ministry toward the non-traditional. The week after the Baker/McConnell wedding Lynn and his wife attended church, and the pastor devoted his sermon to vilifying what Lynn had done. The marriage eventually ended in divorce, though Lynn says there were other issues in addition to his role in the gay wedding.

He received a lot of negative phone calls and hate mail from around the country, including one letter from Boston addressed simply to: “Gay Hippie Minister, Minneapolis”. The letter somehow reached him. Overall, he estimates that the reaction to him was about half positive and half negative. It actually seems remarkable to me that in 1971 the positive reaction matched the negative.

There were two conservative pastors who would routinely heckle Pastor Lynn when he made speeches. It turned out that one was closeted and eventually hit on him. The other made his daughter promise him on his deathbed that she would continue trying to bring Lynn “back to God.” 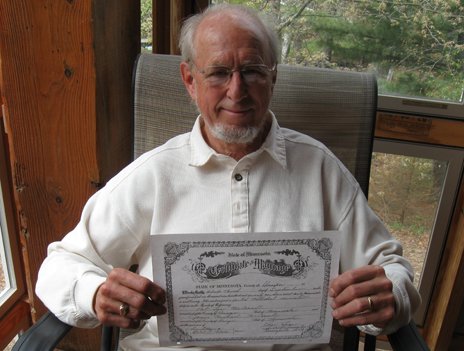 Roger Lynn today is 74, retired, and living north of Minneapolis. He remarried in 1988. In his retirement he has spent time working with mental health issues, youth ministry and other causes. He guest-preaches about once a month, goes to the gym three times a week, does yoga and meditation, and visits his children and grand-children. He and his wife are building an eco-friendly house complete with earthen walls and solar panels.

I wish Roger Lynn were my neighbor!

So what about that lesson we should learn from Lynn’s visceral reaction to the kiss at the end of the Baker/McConnell wedding? Lynn recognized right away that despite his experiences and his political position he had an underlying level of homophobia that he would have to deal with. Which he did. We have to remember that social conditioning and psychological imprinting are extremely powerful forces. Most people today were raised in an environment where same sex physical contact was never talked about, or was joked about, or whispered about. And was certainly not seen. All around them were images and videos of “normal” male/female interactions, and if they were straight there was really no other way to view the world. Further, most people are religious, and many have grown up being taught that homosexuality is against God’s plan.

A lifetime of those influences creates automatic reactions that are not easily overcome. And, as with Roger Lynn, those automatic reactions are generally there no matter what one’s political or philosophical position might be. Those feelings and reactions have to be actively worked through. And to a large degree people have to be desensitized by exposure. That is why shows like “Glee” and others are so important. If kids see gay people interacting physically they will be much more likely to see it as normal, and not have those traditional “squeamish” reactions.

We as gay people have to be understanding – and not get offended – when straight people who support our rights are not completely comfortable with same sex physical interaction. A lifetime of conditioning takes time to overcome, and we must give them that time. An actor who expresses discomfort with kissing another man on screen is not our enemy. Someone who treats us with respect and supports our rights, but is uncomfortable when two males kiss on TV, is not someone to criticize.

Each succeeding generation will be more and more comfortable with gay contact as a routine part of life. For those not there yet let’s understand how conditioning works, and be tolerant.

Here is a link to a video that includes actual footage from the wedding.

Reply CATHY CRONIN
9:20 AM on August 10, 2013
Well, I guess I'm the odd duck then, because I can honestly say that the first time I saw two guys kiss (probably in a movie, or cable show - can't remember), I felt a real thrill of excitement run right through me (if you get my meaning?)! I don't feel that way as often now (miss it!), but I guess that comes with familiarity, eh? Am I weird? Ha ha!!

Reply Dennis Stone
4:33 PM on August 6, 2013
I don't think it was until "Queer As Folk" that I finally and totally got over all aspects of the unease factor. Which is just amazing if you think about it. There I was, a gay guy with absolutely no qualms about my identity at all, and the "rightness" of it, and yet seeing two guys kiss just somehow felt a bit "off". A testament to the incredible power of social conditioning. Thanks Brian and Justin for finally getting me completely past that!

Reply The_Fixer
4:14 PM on August 6, 2013
Yes, I am among those who found it odd and unsettling to see two guys kiss when I first saw it. It later became old hat, of course and now seeing two guys kiss makes me smile. It is societal conditioning, and entertainment media has a lot to do with that. When I was a kid, there was no Glee, and there was no cable TV as it is now. So there was no Showtime and Queer As Folk. Now we have guys kissing on broadcast television. I would never have dreamed that when I was a kid watching sitcoms of the day.

Time will see more people being comfortable with seeing same-sex kisses. Those who are really forward-thinking will spend some time reflecting as Roger Lynn did and investigate why they are uncomfortable. He's to be respected for his self-honesty.

Reply neyronrose
4:01 PM on August 6, 2013
I am enjoying the history lesson articles. I remember being in college and at a gay bar, and kissing the young woman I was dating. I wouldn't have felt safe kissing her out on the street. I guess I long ago got over having a reaction to seeing two men kiss, probably around the same time. But I know that socially conditioned attitude is still very much out there, although hopefully it is lessening among young people. I would say that being treated with respect is the important thing, and that it depends how someone expresses their discomfort. If they're respectful there, too, and realize that's something they need to work on, that's fine. But, again, thank you for the articles. I have many opinions on them.

Reply Dennis Stone
11:52 AM on August 6, 2013
Jellybean - I'm glad you made that comment. Gay people - especially younger gay people prior to the upcoming generation - are no less prone to conditioning than anyone else. I personally have never felt that anything about my being gay was "wrong" - even when I was very young - but seeing guys kissing (and more) was still somehow unsettling for awhile. I simply NEVER saw it growing up, and was bombarded with messages of straight sex being the only acceptable sex. I think a lot of gay people today forget this dynamic, and are way too quick to condemn or belittle a straight person who isn't as instantly comfortable as they now are.

Jellybean says...
I had my first same-sex experience in 1968. This DID include kissing. But, the first time I went to a gay bar, I was "shocked" to see two men kissing. Remember, that had never been done on TV at that time, and there was very little gay literature available (that I would possess). I remember thinking at the time 'Why am I so shocked?'

Today, of course, I really enjoy seeing two men kiss (among other things). I think most people, today, would not be shocked to see two men or women kiss. It's everywhere you look. I think this is one way to get people to accept us. I'm not real big on P.D.A. from either camp.

Reply Jellybean
11:12 AM on August 6, 2013
I had my first same-sex experience in 1968. This DID include kissing. But, the first time I went to a gay bar, I was "shocked" to see two men kissing. Remember, that had never been done on TV at that time, and there was very little gay literature available (that I would possess). I remember thinking at the time 'Why am I so shocked?'

Today, of course, I really enjoy seeing two men kiss (among other things). I think most people, today, would not be shocked to see two men or women kiss. It's everywhere you look. I think this is one way to get people to accept us. I'm not real big on P.D.A. from either camp.